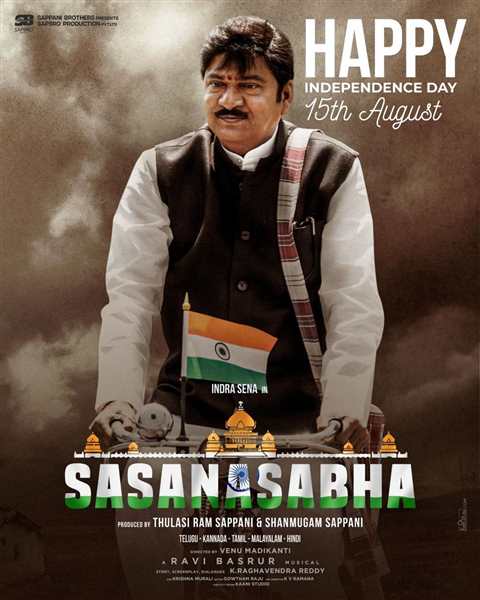 Under the Sapbro Production Pvt Ltd brand of Sapbro Group, Thulasi Ram Sappani and Shanmugam Sappani, also known as the Sappani Brothers, are bankrolling the pan-Indian political film “Sasanasabha.” This movie is directed by Venu Madikanti, who is most known for his work on Venkatapuram.

Recently, the motion poster with captivating images of the Constitution book and legislative assembly as well as an arresting background tune was presented by the film’s creators. The striking BGM was composed by KGF and Salaar fame Ravi Basrur. And the motion made waves on social media, and everyone is eagerly expecting the movie’s update.

The character poster of Veteran Actor Rajendra Prasad, who plays a significant role in the film, was launched today on the occasion of Independence Day. Rajendra Prasad will play Narayana Swamy, an honest and true leader who would be a Member of the Legislative Assembly. He will play his finest character in this film, as he has done in previous roles. This character will be the highlight of this pan-India political film.

As the motion poster had already generated a lot of buzz for the film, the intriguing character posters have raised the stakes to a whole new level. Not only Rajendra Prasad, but also the film boasts magnificent star cast like Sonia Agarwal, known for her role in 7G Brindavan Colony, Prudhvi Raj, jabardasth Apparao, Anish Kuruvilla, and Amit, among others. Gorgeous beauty Hebah Patel is also going mesmerize everyone in special song.

The movie seems to be a spicy political thriller that will appeal to contemporary culture based on its imagery and subject matter.

The lead actor in “Sasanasabha” will be Indra Sena, while the lead lady will be aishwarya Raj Bhakuni. Cinematography for “Sasanasabha” will be handled by krishna Murali, editing by Gowtham Raju, story and dialogues written by K raghavendra Reddy, choreography by Nixon Master-Prem Rakshit, and art direction by K V Ramana.