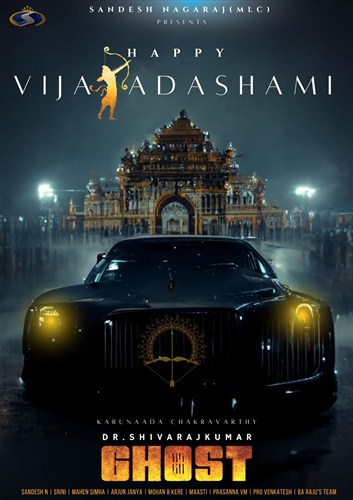 Karunada Chakravarthy Shiva Rajkumar’s upcoming Pan India Film ‘Ghost’ which is touted to be an Action Heist Thriller will be the next big thing. Blockbuster Film ‘Birbal’ fame Srini is Directing this film while Prominent Production House Sandesh Productions helmed by politician and producer Sandesh Nagraj is bank-rolling this biggie.

On the occasion of Vijayadashami, Team ‘Ghost’ released a brand new poster wishing A Happy Vijayadashami to all. The poster with a huge black car with an emblem of bow and arrow marking the Dussehra festival looks striking. The film will be launched in a grand manner on 12th October.

The crew of ‘Ghost’ comprises top technicians. Dialogues by Masthi and Prasanna VM’. Art is by Shiva Kumar of KGF fame. Music is being composed by popular music director Arjun Janya. ‘Ghost’ is produced by top production house Sandesh Productions.

Sreshth Movies Macherla Niyojakavargam Shooting Completed, Except For A Song