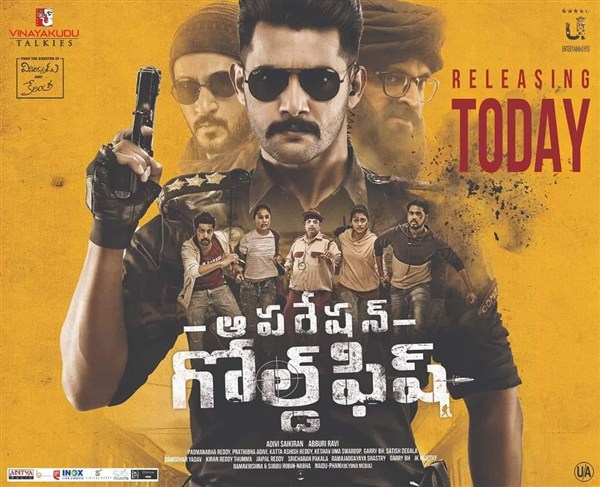 Operation Gold Fish is Aadi Saikumar’s new movie that is in the theatres today. Aadi has been struggling for a decent hit for quite some time now and it is not happening at all. With this one, the actor is hopeful of making a comeback to success. On the other hand, the film is also like an acid test for the director Sai Kiran Adivi. Let us hope that the film becomes a hit. Read on to know the review of the film here.

The movie is about the mass exodus of Kashmiri Pandits. The leader of a terrorist community is Ghazi Baba (Abburi Ravi). After getting the information that Ghazi Baba is in Hyderabad, Arjun Pandit (Aadi Sai Kumar) arrests him in a Commando operation. Ghazi Baba’s follower Shahrukh (Manoj Nandam) makes a plan to get Ghazi Baba out of the jail. He kidnaps the daughter of a Union Minister and demands the release of Ghazi Baba. Can Shahrukh kidnap that girl? Can the Commando officer Arjun Pandit save her? forms the rest of the story.

Aadi is definitely the biggest plus point for this movie. The way he has portrayed his role is outstanding and his energetic performance became a highlight of this film. He went under the skin of the character and acted very well. Sasha Chettri breathes life into her role and has given her 100%. Rao Ramesh got a meaty role in this film and they have acted naturally in the movie. Nithya Naresh looked gorgeous in the film. Krishnudu delivered honest performance in the film. Manoj Nandam acted decently. Abburi Ravi’s splendid performance added more strength for the movie. Anish Kuruvilla also performed well. The rest of the actors also delivered decent performances.

Sai Kiran Adivi has prepared an interesting storyline for the movie and has succeeded in narrating in an interesting way. Though he started off the movie very nicely, it seems like he has lost the grip in some sequences in the first half. The second half and the climax are worth appreciating. His pace of narration will also engage the audience throughout the movie. Production values by Vinayaka Talkies banner are very rich. We can say that the producers made decent investments for the film. Music by Sri Charan Pakala is impressive. A couple of songs are good and his BGM will elevate every scene well. Cinematographer Jaipal Reddyy has produced some captivating visuals for the movie. Editing by Garry BH is clean and neat.

The movie starts off on an interesting note. The first 10 minutes of the film itself is enough to engage the audience. The first half is intriguing and will keep the audience guessing. The interval block is outstanding. The second half is all about the revelations and is full of twists and turns. When compared to the first half, the second half is even more enjoyable. The lack of commercial elements will be a set back for a section of the audience. The movie sure is a roller coaster of emotions, and the climax is fantastic. Aadi, storyline, and BGM can be the highlights of this film. However, some of the boring scenes in the second half will be the minus points. Overall, ‘Operation Goldfish’ is definitely a must-watch thriller but only for a particular section of the audience.