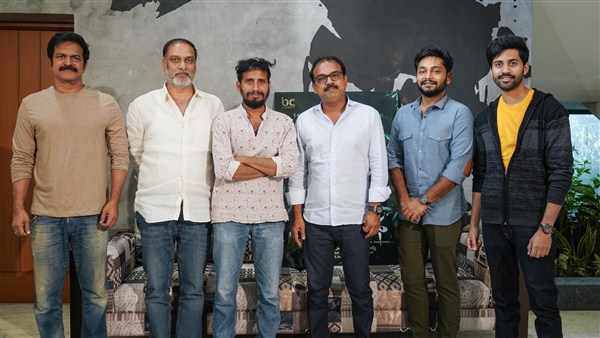 “This film might be titled a ‘Pitta Katha’, but I believe it has a big story and immense content in it,” said ace filmmaker Koratala Siva. It is already known that Bhavya Creations is bankrolling ‘O Pitta Katha’ and the title poster of the film is recently released by Trivikram. Chandu Muddu is is directing this feature film. Koratala Siva released the characters poster of the film today. addressing the gathering at the event, Siva said, “This is an excellent title. they had given a glimpse of the characters through the first poster I strongly believe it has a big story and immense content. Just like the senior director Vamsi garu’s films in the past, Chandu has presented this film in such an excellent manner. Every visual of the film is heart-stealing. This movie will definitely win the hearts of Telugu audience this summer. I wish all the very best to the entire unit.”

The producer, V Anand Prasad said, “I felt the story was very exciting when Chandu narrated the story to me and we took it onto the sets with no delay. The film came out very well.”

Executive producer, Anne Ravi said, “This film has good comedy and thrilling elements. It has a gripping screenplay as well. We wrapped up the shoot and post-production is going on now. We will be releasing it this summer.”

The director, Chandu Muddu said, “This story takes place in a village and every scene is as pure as it has to be. It has gripping elements and equal dose of comedy. It keeps the viewers engaged till the rolling titles. It mainly runs on the screenplay.”