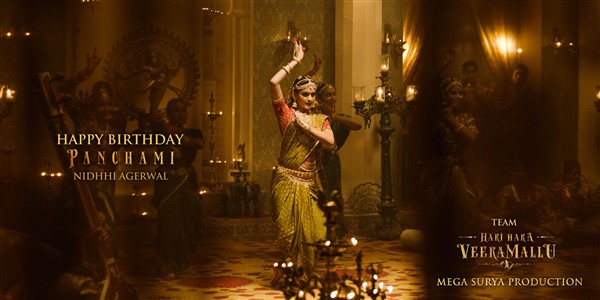 A beautiful poster of Nidhhi Agerwal from Hari Hara Veera Mallu has been released today to mark the actress’ birthday.

The poster designed in poetic manner shows the actress in a dancing pose. Niddhi herself has launched the poster on her big day.

Film Starring Powerstar Pawan Kalyan in the titular role will depict the life of legendary warrior Veera Mallu, is directed by Krish.

The film is being made on a grandeur budget of Rs 150 crore. Fifty per cent of the shoot is over and the remaining will be completed soon.

Produced by A Dayakar Rao on Mega Surya Production banner, the movie will be presented by A M Ratnam in Telugu, Tamil, Hindi, Malayalam and Kannada.

The film is the first collaboration between Krish and Pawan Kalyan. It is set in 17th century with the backdrop of Mughals and Qutb Shahis.