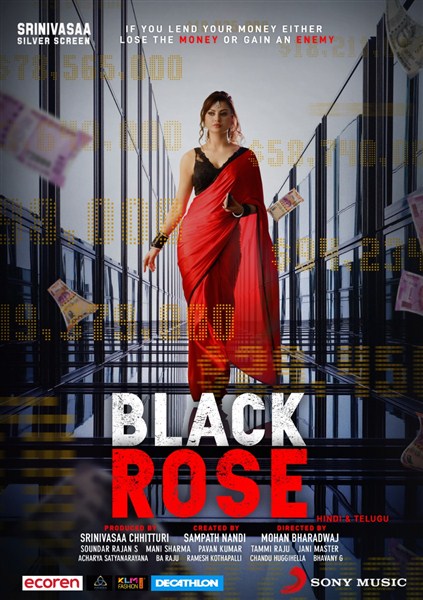 With the film titled ‘Black Rose’ Urvashi is playing the main lead and considering her popularity, the film is being simultaneously shot in Hindi and Telugu langauges.

Telugu director Sampath Nandi of ‘Racha’ and ‘Bengal Tiger’ fame penned the script. He said, “This is female-oriented film and is based on a character named Shylock from Shakespeare’s ‘Merchant Of Venice.’ It also deals with the point “Transactions Which Have No Conscience or Morals… Are Indicators Of Death” from Kautilya’s ‘Arthashastra.’

Urvashi who is willing to step into Tollywood, was mighty impressed with the script which is touted to be an emotional thriller.

With ‘Black Rose’ Mohan Bharadwaj is debuting as director and speaking the director said, “It’s a tale of a strong modern woman, Vasudha. She is a 30 year old beautiful and matured woman with kindness at heart. But she goes through a lot personally and professionally. How she dealt her personal life and professional crisis makes up the entire story. People in this world can be categorized into two kinds.
Those who want to succeed in life.
Those who want to survive.
Vasudha belongs to category of THIRD kind that she wants to be happy.”

The film’s shooting has commenced on August 17th and wrapped up the entire shooting in a single schedule.

Srinivasaa Chhitturi is producing the movie under Srinivasaa Silver Screen