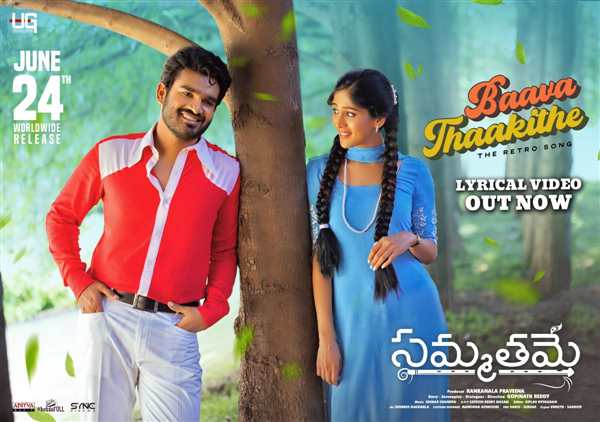 Young and energetic hero Kiran Abbavaram’s upcoming musical romantic entertainer Sammathame under the direction of Gopinath Reddy features Chandini Chowdary playing the leading lady. The film’s teaser got positive response from all the corners, whereas couple of songs released so far by the team too became superhits.

Today, lyrical video of the film’s third single Baava Thaakithe is unveiled and the retro song shows romance between Kiran Abbavaram and Chandini Chowdary in 80’s style. The song is all about both expressing their love for each other in the imaginary world of Kiran. Sanapati Bharadwaj Patrudu wielded his pen, while Mallikarjun and Malavika lent vocals in a bid to bring back the memories of golden days. Needless to say, the retro song is going to be a visual feast.

Kankanala Praveena is producing the movie under UG Productions, while Sateesh Reddy Masam handles the cinematography.