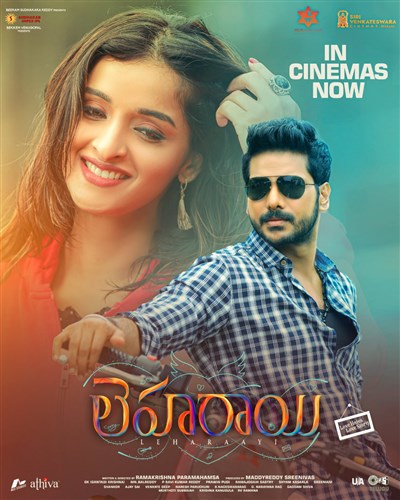 The film Leharaayi stars young talented hero Ranjith and Sowmyaa Menon as the leads and is presented by producer Bekkem Venugopal, who has gained a special craze for himself with consecutive successes in the Telugu film industry. This film, which sparked excitement with its teaser, trailer, and songs, has finally arrived in theatres. Let’s see how good this movie is now.

Meghna (Sowmyaa Menon) is the Purushotam (Rao Ramesh), a great doctor. She is raised perfect since childhood. A girl fails in love and commits suicide one day. Rao Ramesh, who was shocked by the incident, promises his daughter that he will not put himself in such a situation because of her. Meghna swears to her father Purushotam that she will never love anyone. However, she unexpectedly proposes to Karthik (Ranjith Sommi). But why does she choose to to propose to him? What happened to Sowmyaa and Ranjit’s love, and what is Ranjit’s relationship with the girl who committed suicide in the beginning? That’s rest of the story.

It is a solid commercial film with all of the family elements that demonstrate the bond between father and daughter. Despite the fact that this is a typical commercial film, the director has succeeded in directing and writing this drama in an entirely new way.

In comparison to the first half, the story becomes more interesting in the second half. Hero Ranjith has done well in the heroism scenes and has proven to be a promising performer. Sowmyaa Menon, the heroine, has done well within her scope. Rao Ramesh, who played the heroine’s father, and Naresh, who played the hero’s father, do not need to be mentioned because their performances were phenomenal. Gagan Vihari played an antagonist with negative undertones. The comedy of Ramprasad, Satyam Rajesh, and Ali worked well.

Director Ramakrishna Paramahamsa has presented a typical story in an entertaining manner that does not bore the audience. The camera work of MN Balareddy is excellent. The visuals are colourful. The music of GK (Ghantadi Krishna) is a big plus for the film. The songs and BGM are both excellent.

Minus Points:
Routine story line
Some unnecessary scenes in the first half
Few songs placement

Overall, It is a good family entertainer that can be enjoyed with families.