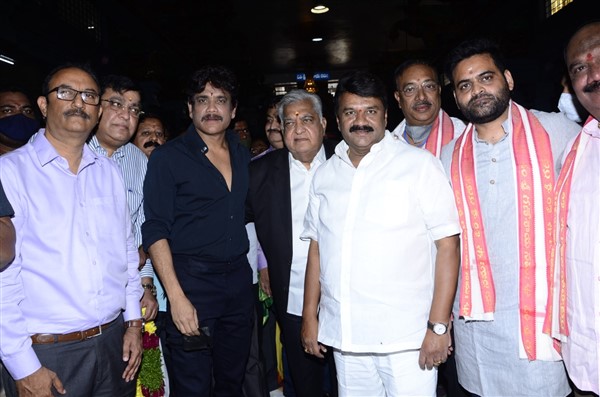 King Nagarjuna said, ” Yesterday, I have completed shooting my part for Hindi film, ‘Brahmastra’ starring Amitabh Bachchan, Ranbir Kapoor, Aalia Bhatt Directed by Ayan Mukherji in Karan Johar’s production. Today, I am very happy to launch my movie at the prominent Ganapathi Temple here at Secunderabad. I came to this temple for the first time. This is an ancient and a very powerful temple. This film is being Produced by Sri Venkateswara Cinemas LLP and Northstar Entertainment Pvt Ltd banners in Praveen Sattaru’s Direction. Title is yet to be finalised. It’s been a while since I played a Powerful role in a complete action backdrop film. The film will be shot in London, Goa, Ooty and Hyderabad.”

Director Praveen Sattaru said, ” I am glad that the muhurtham of Nagarjuna Gari starrer Directed by me is happened here at Secunderabad Ganapathi Temple. Our entire team is very excited and feels energetic to start the shoot of this film. This is a stylish action film. Details about artists and technicians will be revealed soon.”

Popular Producer Puskur Ram Mohan Rao said, ” This film in Nagarjuna and Praveen Sattaru’s combination is being produced by Me, Suniel Narang and Sharrath Marar. We planned to shoot the film for 10 days at Hyderabad and in March for 15 days at Goa. Then we shoot the film at Ooty and London. We are planning for a 4 day shoot at South Korea. This film will feature a huge casting. This will be one of the best movie in Nagarjuna Gari career.”

King Nagarjuna and big casting will feature in this film.