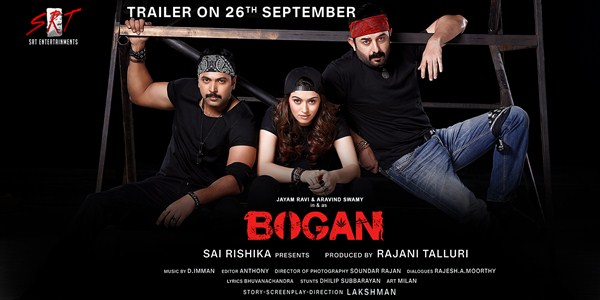 Jayam Ravi, who is one of the top lead actors in Tamil, is well known to the Telugu audience as well. He is the son of the renowned producer ‘Editor Mohan’, who has also produced many blockbuster movies in Telugu. Jayam Ravi’s Tamil blockbusters which were dubbed in Telugu have been successful and his other movies which were remade in Telugu
turned out to be blockbusters.

‘Bogan’ is another super hit film from the hit combo of Jayam Ravi, and Arvind Swamy after ‘Thani Oruvan’. It is an action thriller directed by Lakshman. The movie was made under a meagre budget but it grossed more than 25 crore rupees at the Tamil box office.

Now ‘Bogan’ is being released in Telugu with the same title under SRT Entertainments banner and would be presented by the prominent producer Ram Thalluri. Dubbing work has already been completed. Producer Ram Thalluri said that they have taken utmost care in dubbing work to ensure that it doesn’t give the impression of a dubbed movie.

‘Bogan’ is the story of a police officer named Vikram who tries to catch the accused named Aditya while investigating a bank robbery case. The way Vikram captures the ever escaping Aditya with his brilliant plan would be a terrific interval bang. After that, the story takes an unexpected turn and keeps the audience on the edge of their seats till the end.

Jayam Ravi as Vikram IPS and Arvind Swamy as Aditya have given a terrific performance. Hansika Motwani is the female lead. D. Imman composed music and Soundar Rajan handled the cinematography.

The producer said that preparations are being made to bring the movie to the Telugu audience soon. The trailer of this film will be released on September 26th.