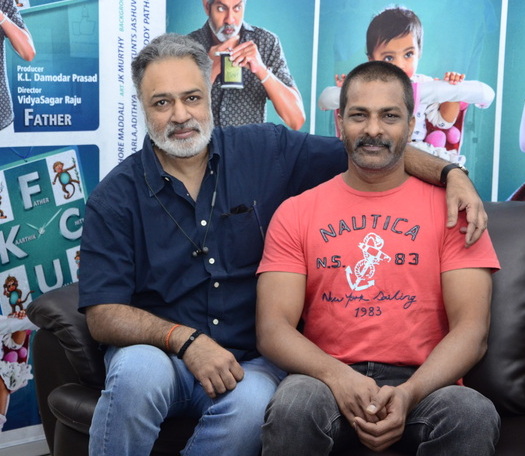 *After this film I am confident that Jagapathi Babu will
get a lot of jovial characters: KL Damodar Prasad, Producer

FCUK film which is an acronym for Father Chitti Uma Karthik which stars Jagapathi Babu as the main lead along with Ram Kaarthik and Ammu Abhirami as a romantic young couple and Baby Sahasritha in a pivotal role is set to release on February 12th 2021.

The movie team led by producer by KL Damodhar Prasad of Sri Ranjith Movies and Director Vidyasagar Raju while interacting with the media on Monday revealed the highlights of FCUK movie.

Question: What inspired you to make this film under the direction of Vidyasagar Raju?
Damu: The reason I take two to three years time for each film is my attention to scripts. I don’t begin work on a movie unless I am absolutely confident that the script is unique and interesting. I also am very selective about the directors I work with. I look into their commitment to work and their experience with various crafts. Vidyasagar is a very talented director but has been crushed in the industry. When I saw his script it was very interesting and we worked on the detailing and now I am very happy with the result. I am thankful to Jagapathi Babu garu for introducing Vidyasagar to me.

Question: Why the controversial title ‘FCUK’?
Damu: The story of this film is told with four main characters. That is why we named it ‘Father-Chitti-Uma-Karthik’. Since its lengthy name we are using its acronym FCUK. I know that a small spelling change will change the meaning but there is nothing of such type in the movie. The movie will only generate wholesome laughter.
Sagar: There are only four characters in this movie. The name of the character played by Jagapathibabu is Phani. He is a hero father character. The characters of the three generations, the difficulties caused by the generation gap, and the scenes between the characters are told in the comic way. The whole movie is hilarious. If you watch the movie, you will say that the title ‘FCUK’ is apt.

Question: Wasn’t it difficult to work with a baby?
Sagar: It’s hard. Thanks to Jagapathibabu for this. He was very patient with us when we shot the scenes that came with baby combination. Usually children do not wake up immediately when they fall asleep. But small sounds used to wake her. So when she had to do the sleeping scenes, all the members of the unit worked without even putting sandals on their feet. Anyway, it’s a God-given gift for this baby-friendly movie.

Question: Did the film get an ‘A’ certificate from the censor?
Damu: Shree Ranjith Movies banner will never make a movie that is not family oriented. The film was given an ‘A’ certificate by the censors without a single cut or beep. That said, there are no nudity or kiss scenes in this movie. There are some bold dialogues. You can cut them and get a U / A certificate. But doing so loses the emotion in that scene. That is why we took ‘A’ certificate without a cut.

Question: Many people have released their films in OTT during pandemic Time .. why didn’t you do that?
Damu: Every movie is a learning experience for me. As well as the pandemic time is also a learning experience. I love movies and I am not doing movies only as a business. This movie was made for the audience to enjoy in the theaters. As a product I want to take it to the maximum people. If the product is good, it will give a name to everyone, it will give a career to everyone.

Question: What entertains the audience in this movie?
Sagar: Everyone will enjoy the comedy in the movie. The film manages to entertain with its comedy throughout. In a word, this movie is a comic relief for the audience. This is a genuine film. Every emotion in it feels genuine. Doesn’t seem to be forced anywhere.
Damu: Recently I showed this movie to people we know. Audiences ranged from adults to children. Everyone felt connected with some character or incident in the movie. With that came the confidence and satisfaction of making a good genuine film.

Question: Is Jagapathibabu the first choice for the father character?
Sagar: As Damu garu said, this script was not written with any of the characters in mind. We did a genuine script. We thought anyone would be good at the characters in it. But Jagapathi Babus stellar performance has made a phenomenal difference to the movie.