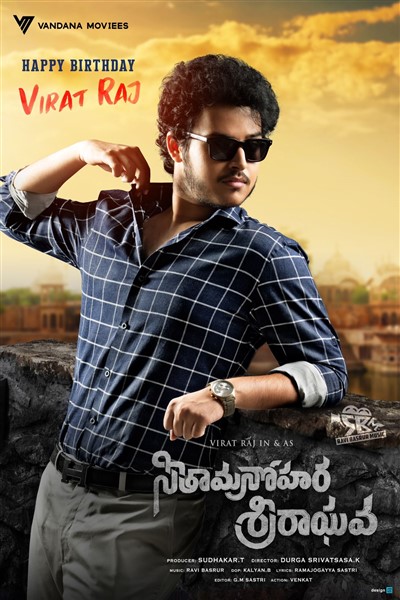 Another talented youngster is getting introduced as a hero in the Telugu film industry. He is Virat Raj, the grandson of actor Venkata Subbaraju, who was the brother of the handsome actor of yesteryear Haranath. Virat Raj plays the lead role in the production of Vandana Movies’ “Sita Manohara Sree Raghava.”

On the occasion of his birthday today, acting guru Sri Satyanand unveiled the Poster,video glimpse and wished him great success.

Venkata Subbaraju played key roles in hits such as “Kode Naagu”, “Bhakta Tukaram”, and “Riksha Raji”. Virat Raj expressed his happiness on being introduced in “Sita Manohara Sree Raghava,” which is billed to be a wholesome family entertainer.

Talented youngster Durgaa Srivatsasa K is making his debut as the director. “I could not have to get a better launchpad than this. The title itself gives away the theme of the story. Apart from the family elements, the film is packaged as a mass entertainer. It will appeal to all sections of audiences,” Durga stated.

The team is glad to announce Ravi Basrur’s name as the music director. Ravi Basrur is the man behind the Pan-Indian rage “KGF-2″ franchise and ‘Salar’.

Informing further details, producer Sudhakar said, “We are happy to introduce another talented actor to the silver screen. The regular shoot will commence in September. The other cast and crew details will be finalized shortly.”

The film will also feature some prominent actors.

I’m Dedicating Liger To All My Fans, Aag Lagaa Denge: The...