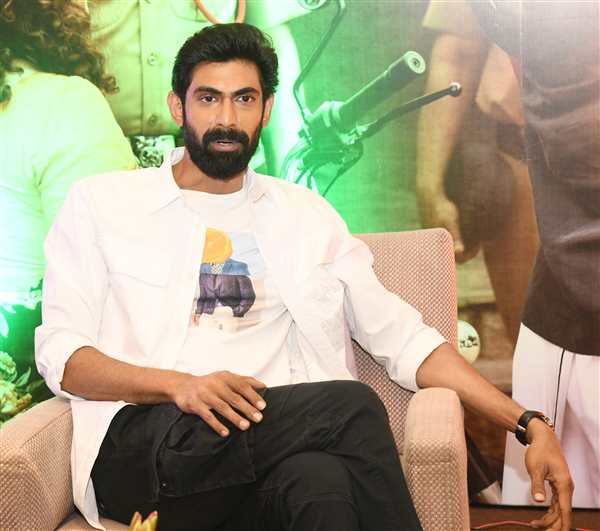 Rana Daggubati made a mark with his portrayal of Daniel Shekar in Bheemla Nayak. As his character is multi-layered in the film, many enjoyed him on screen. The confrontation scenes were a treat to watch. Bheemla Nayak released on February 25 and is declared a blockbuster. Pawan Kalyan, Rana Daggubati, Nithya Menon, Samyuktha Menon, Murali Sharma, Rao Ramesh, Samuthrakani were part of the principal cast. Written by Trivkiram and directed by Saagar K Chandra, the film has good amount of action featuring Pawan Kalyan and Rana Daggubati who is enjoying the success and is happy for all the good responses he is receiving.

Here are the excerpts from Rana’s interaction with media.

On watching Bheemla Nayak in cinemas

I was in a shoot in Mumbai on the release day. I watched it in PVR Mumbai and could expect the craze of fans here. I got loads of wishes on social media and from all corners and it was a fulfilling experience.

What was your feeling when you heard Pawan Kalyan was on board?

I thought the film would hit a big scale. I believe in cinema that stays true to the genre. With a stalwart like Pawan Kalyan doing a film like Bheemla Nayak, I expected a good starting point for Telugu cinema to experiment and venture beyond the normal.

On the journey with Trivikram

He is an exciting person. All his words are valuable. He is a knowledgeable person with degrees in Physics and Nuclear Engineering. He got a grip on language and culture. You keep learning new in each film and here in Bheemla Nayak, I took loads of knowledge from Trivikram and Pawan Kalyan.

Is it good to have a reference point while portraying a character on screen?

Bheemla Nayak is a different film. The emotion at the start stays till the end. There are no subplots and other conflicts crossing paths. Though I can take a reference point from Koshi’s character from the original, there must be many changes. A rich politician in Telangana or AP reacts differently when compared to one from Kerala. The sensibilities and other elements are different. We are more flamboyant. When I watched Marvels’ Iron Man, I liked Robert Downey Jr’s character. He is flamboyant and maverick in nature. I could relate Danny’s character with that. Luckily my reference point to Danny is closer but for Bheemla Nayak it’s farther.

I feel the best one was from my father. He said the film is very satisfying and you did great.

How is it working with Pawan Kalyan?

I am exposed to cinema in a different way. I have been doing films in different languages and genres. I worked with a variety of people. But Pawan Kalyan is something different. He is a pure soul. I heard many things about Pawan Kalyan and getting to him up close is a different thing. I enjoyed the whole experience.

On experimenting different genres after the success of Bheemla Nayak

I picked a few films that are rejected by others. I understood how to play characters but never understood how to become a hero. I like to stick to the story and most of the time stay away from commercial trappings. I always tell my father that I will get a hit without any commercial elements. So, I want to stick to my core belief. I always believed in doing films with new concepts and will keep on doing them.

Pawan Kalyan is a cult icon. How did you manage working with him?

Yes, he has a cult following. But I just stayed with Danny’s character. I only focused on how the character works and emotes, so didn’t find it a challenge while shooting.

What was the toughest thing while shooting for the film?

The tough thing was to come out of the original and make a different film. Sometimes it’s scary. Here all good things happened because of Trivikram. Some scenes were shot like the original but later we realized it’s not close to our culture. In Malayalam, the film is verbose. Here we had to cut it short. As I told before, the characteristic traits have to be tweaked as per the liking of Telugu audience.

Has Bheemla Nayak shaped the way you envisioned?

My imagination was limited to one genre, but Bheemla Nayak went beyond that. In one line of emotion, we could hold the audience attention for more than 2 hours and that’s an achievement.

On balancing flamboyance in the character of Danny?

I am quite a flamboyant, crazy person. So, I could get into the skin of the character. For certain characters you go overboard and do your stuff. Here I tried to match to the character requirement.

Your family has a reputation of playing safe with films. You are quite different from them. Your comment on this

I grew up in a film world. My home is a film location. In my 5th grade I learnt editing. The way I look at films is different. I want to do something I have never seen in cinema. That was always my attraction as a young kid. I like to watch something new and want to do new and different characters.

This was quite a long process. When Pawan Kalyan was on board, we wanted to add more layers to the characters and not just the way Biju Menon played it extreme to character. We don’t like stuff like that. We enjoy big things happening on screen. That’s why there is a change in the way Bheemla Nayak and Daniel Sekhar were presented on screen.

On working with Saagar K Chandra

Right from the beginning Sagar has got his things sorted. He is a perfectionist. I was jealous of Sagar that he got a wonderful chance of working with Pawan Kalyan and Trivikram. He was able to extract what he needs from the characters and got a good control of the set. He is also a person faithful to a film’s genre. He sticks to the style. He became a more matured director with Bheemla Nayak.

More on the characterisation of Danny

Danny is a layered character. He is a loving husband, he respects women, he has an army background, and loads of ego. He is sometimes over the top, loud, and sometimes filled with empathy. This multi-layering of the character worked well when he was pitted against a heavy weight like Bheemla Nayak.

On Thaman’s music for Bheemla Nayak

Thaman is a blessing to the recent Telugu cinema movement. He is one of the reasons why cinema is so cool. The kind of singers, lyricists, instruments he used for Bheemla Nayak made me spell bound. There is a different Thaman speaking with you in the film. To get an audio like this, it’s only possible by Thaman. He has carved a new story of his victory.

Your favourite dialogue from Bheemla Nayak

‘Ey unnava poyaava’ in the climax fight is my favourite. As it was real and spontaneous.

Sithara Entertainment is a brave production house. There is a new energy in them. They put me at comfort all through the film’s shoot. I wish them all the luck and I wish to do more films.

The Police station one. We started in order and most of the scenes were shot in order.

Will there be a Bheemla Nayak 2?

What will we do there? Fight with each other again. That’s difficult I believe.