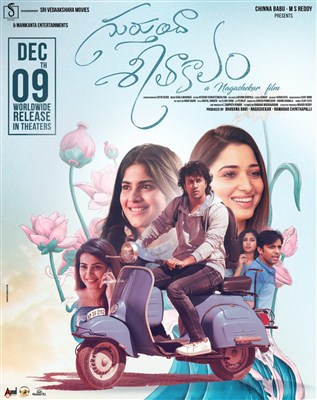 Versatile actor from Tollywood Satyadev’s is coming once again to delight movie lovers. He recently delivered back to back power packed performances. And this time he is coming a emotional and youthful rom com. The film Gurtunda Seethakalam starring Tammannah Bhatia in female lead role has kept audience waiting for a long time.

Finally, there is an exciting update from the makers of the film. The update is that the film will release theatrically on December 9th. The release date was announced with a cool romantic poster.

Film lovers long awaiting for this romantic entertainer. With this news everyone is now rejoicing. The film’s trailer which was released earlier got a good response. The story revolves around the different love stories the protagonist goes through in different phases of his life.

Megha Akash and Kavya Shetty are playing other important roles. Recent sensation Kaala Bhairava is composing the music. The film is directed by Nagashekar R and is produced by Bhavana Ravi, Nagasekhar, and Rama Rao Chinthapalli.