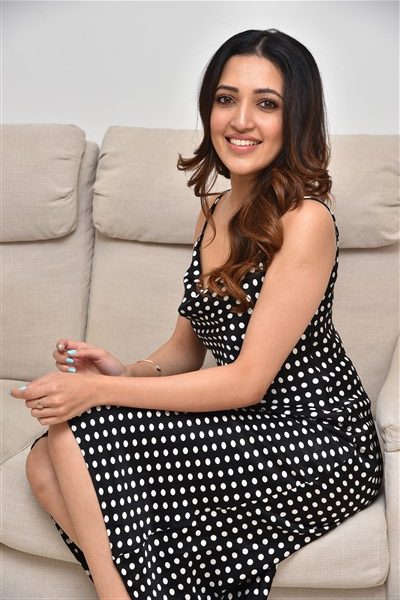 Actress Neha Shetty is all set to put the screens on fire with her portrayal of an honest, new-age girl Radhika in her latest outing, DJ Tillu. The trailer released recently is getting a lot of attention for its quirks and characters, and it gives an impression of a laugh riot. Directed by Vimal Krishna with Siddhu, Neha Shetty, Prince Cecil, Brahmaji in key roles, the film is slated for a mega release on February 12. That’s a great gift during the Valentine week.

Here are the excerpts from the Neha Shetty’s interaction with media.

*On her career journey*

I wanted to become an actress and it was my childhood dream. I did a lot of ads – Horlicks, Kissan, Sakshi newspaper, and was crowned Miss South India. That caught the attention of director Shashank and I was offered a role in Kannada film, Mungaru Male 2. Then I acted in Puri Jagannadh’s Mehbooba. Then took a break and did a 6-month acting course in New York Film Academy. I was occupied with my studies and a lot of other activities so never got time to enrol myself into a formal acting course, so I got into that. After my course, I acted in Gully Rowdy and Most Eligible Bachelor, and now I am coming with DJ Tillu, and I am super excited about it.

*On her character in DJ Tillu*

My character’s name in DJ Tillu is Radhika. The reference to Radhika Apte in the trailer got everyone in splits. Radhika is an intelligent, new-age girl who is confident and knows her stuff well. She is honest and doesn’t care much about the popular opinion. This is a real fun to watch on screen. A lot of women will connect with Radhika and the power of speaking up.

*On the time taken to prepare for the character*

To be frank, in just 3 days I was in the character. I could relate to the character very well. That’s how I want the characters to be – straightforward and confident. This is somewhat different to the regular girl next door like characters. That impressed me a lot.

*On the humour and Telangana slang in DJ Tillu*

I don’t know much of Telangana slang and there aren’t many movies in that zone. I learnt some Telugu and try to enjoy the script, the dialogues in Telangana slang. The comedy is fresh and instantly clicked with me.

*Any difficult scenes to act in the film*

Director Vimal is very clear in the way he wants a particular scene to shape up. He gave freedom and asked me to explore the character differently. I tried something new, and it worked. So, I didn’t see the whole thing as difficult. It took some time for me to showcase the confidence in the character, otherwise it was a joy ride. In olden times, there are certain antics with which they portrayed confidence, but here we tried differently. It was little tricky to bring out the subtleties, but it was worth the effort.

*On researching for the role of Radhika*

I didn’t spend much time researching for the role. I rather had some meaningful discussions with Siddu and Vimal to understand and practice for the role. The worked well.

*What connected you with Radhika’s character?*

I can talk a lot about the character and there are loads to talk about it. But you have to see it to believe it. There is a reason why Radhika is different and there is an air of mystique around her. And I will hold the surprises so you can get those from watching DJ Tillu.

*On signing for the film*

The production house, Sithara Entertainment, is big and it’s a great opportunity for me. The whole combination of cast and crew is power-packed. Siddhu and Vimal are very creative. DJ Tillu is a blend of comedy, romance and thriller. The trailer gives a glimpse of all the elements. I am lucky to be here with Sithara and a wonderful team.

*Few years back there were a few intimate scenes in films, but now there are plenty?*

A scene originates from the writer or film-maker’s desk. If the writer feels intimacy is apt to covey certain emotion, then there be it. So, it all comes from within. If you are planting an intimate scene just for the sake of it, then it comes out as a sore thumb.

*On working with Siddhu*

He is multi-talented. He is amazing in acting and there is so much to learn from him. I had jolly time during the shoot. The director had to say cut so many times as I couldn’t stop laughing even after the scene is over. That’s the magic of Siddhu on sets. I was surprised to know that he was a singer too.

*The effect of lockdown on shoot and production of DJ Tillu?*

It didn’t affect much as everyone was busy to make the best product. We used our times in a better way in fine tuning DJ Tillu. You’ll appreciate that when you see it on screen.

It’s a fun experience and a good way to promote our film. I really enjoyed playing the games and interacting with the anchors and fellow participants.

*Are you prepared to handle trolls and comments on social media?*

We are all humans, and everyone has an opinion. I let people to live in their space and I live in mine. I can pretty much handle the comments and trolls, if any, on social media and won’t let them impact my life and career. I am watchful of the happenings, and I handle them personally and also got a team for it. I believe in personal touch so will reply to a few comments personally.

*Are you happy for the way the career shaping up?*

Happy as of now. Taking it slow and doing good projects. Not kind of choosy but want to take the right projects.

*On many Shettys coming to Telugu film industry*

It’s a healthy sign that many aspiring people from Mangalore are making inroads into Telugu film industry. It’s good to see them growing.

*What’s the inspiration for becoming an actor?*

I was 2 years old when I saw Hrithik Roshan’s first film. I was in awe with his dancing. I love dancing and want to emulate him in many ways. This generated interest in dancing and acting. My school was supportive at that time, and everyone watched my first film and supported me through my acting journey.

DJ Tillu is a Mass entertainer. It’s a laugh riot. During the pandemic there were many ups and downs in people’s live and this movie will make them forget everything. Please go watch it.