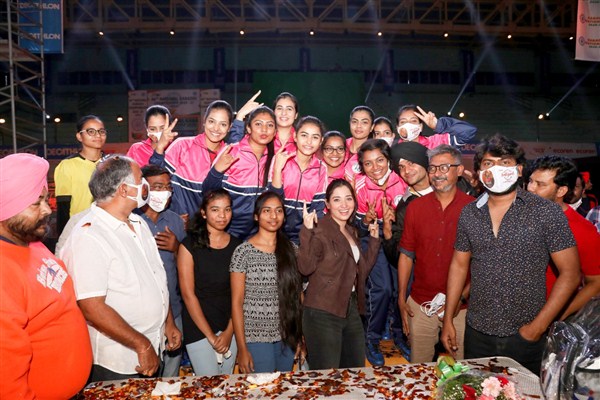 Aggressive Star Gopichand’s latest is ‘Seetimaarr’ Directed by Mass Director Sampath Nandi. Presented by Pavan Kumar and Produced by Srinivasaa Chhitturi under the Srinivasaa Silver Screen banner. This Sports-based film with a backdrop of mass game Kabaddi is being made with big budget and high technicalities . Star Heroine Tamannaah is playing the role of Jwala Reddy, A Coach to Telangana Women Kabaddi Team. She is celebrating her birthday on December 21st. The Team has celebrated her birthday in a grand manner on the sets of ‘Seetimaarr’. Tamannaah has cut the cake amidst unit members and celebrated her birthday. Hero Gopichand, Director Sampath Nandi, Actress Bhumika, Producer Srinivasaa Chhitturi, Presenter Pavan Kumar, Heroine Digangana Suryavanshi and all unit members were present and conveyed their wishes to Tamannaah. Looks of Gopichand and Tamannaah which were released so far have garnered superb response. Makers released a Special Birthday Poster for Tamannaah today on the occasion of her Birthday. Melody Brahma Mani Sharma is composing music for this film.