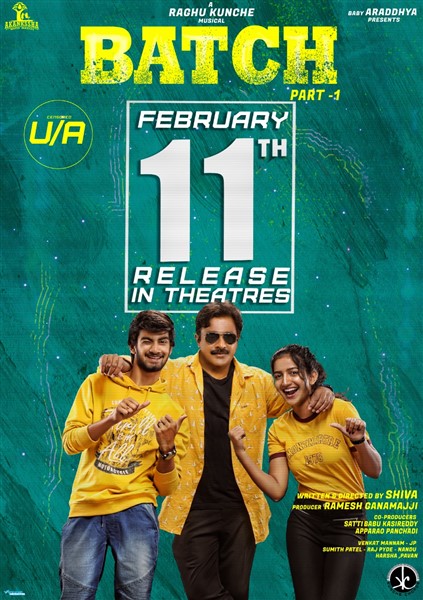 Satvik Varma, who has impressed as a child actor in films like Bahubali, Resu gurram, Duvvada Jagannatham, Malli rava, is all set to make his debut as a hero in the film “Batch”. Satvik Verma and Neha Patan will be seen as a couple under the banner of Akanksha Movie Makers in the Baby Aradhya presentation. The producers have announced that the film will be released on the 11th of this month with music by Raghu Kunche. It is being released in two parts.

On this occasion Director Shiva says.. The film is aimed at youth and is a story about betting and male prostitution. The music provided by Raghu Kunche is the highlight of the film.The songs that have already been released have reached the audience with a million views. “I sincerely hope that our batch film, which will be released on the 11th of this month, will be a great success.

Producer Ramesh Ganamajji said,.. “We are very happy to be in the film business in the current situation. All the senior artists who acted in it acted very well. They all gave us full support.We are confident that our ‘Batch’ movie which is coming on the 11th of this month after completing all the activities will be 100% hit. Audiences are all about our movie Said wanting to embrace and bless

the GameChanger, baby #Saharshitha as Chitti from ‘FCUK’

Dhanush comes up with Suruli