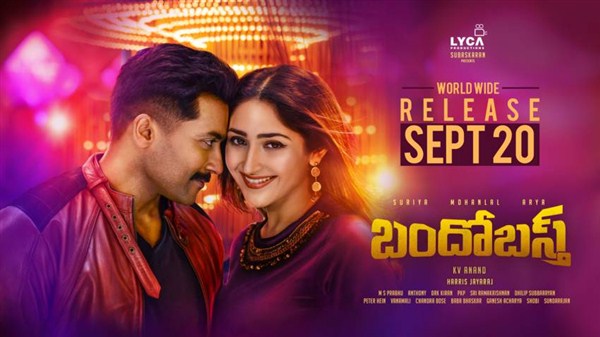 Story:
The entire nation gets shocked with the murder of Prime Minister Chandra Kanth Varma in a terrorist attack. His security officer Siva (Suriya) starts working on the case only to find that there is a major conspiracy behind the murder. How many challenges does he face while unravelling the secrets of this murder? How PM’s son (Arya) related to the case? To know these answers, catch the film at your nearest theatres.

Suriya is truly an asset for this film. Despite getting a challenging role, Surya has pulled it off with so much ease and energy. Especially in some scenes, Suriya’s performance added more strength for the film. Mohanlal is definitely worth mentioning as the senior actor has showcased his versatility in the film. Though his screen time is not more, Mohanlal made his screen presence felt with his impeccable performance. Arya’s flawless performance can also be considered as the biggest plus points of this film. The actor not only got an interesting role but also grabs the attention with his honest performance. Sayyeshaa looked beautiful and also delivered an intense performance in the film. Boman Irani gave his hundred percent in the role. Chirag Jani and Poorna justified their roles. As usual, Thalaivasal Vijay and Samuthirakani performed well. The rest of the actors also made their presence felt.

Director KV Anand has come up with a really interesting storyline for the movie. He has not only designed some strong characters but also laced a beautiful and powerful story between them. The way he has executed the storyline is really interesting and made the movie even more relatable for the audience. He also made sure that to maintain a constant pace of narration which also became a plus point for the film. Production house like Lyca Productions who is known for their outstanding production values repeated the same for this movie as well. Music by Harris Jayaraj is amazing. He has not only given some good songs but also interesting BGM which made the audience connect easily with the storyline. Cinematography by MS Prabhu is top-notch. His camera angles are amazing. Editing by Anthony is clean and neat.

The movie starts off on an interesting note and the first 10 minutes of the film itself will grab the attention of the audience. The way the director narrates the story is really captivating. Especially, the first half is handled really well. The characterizations are designed in a beautiful way and the relationship between them is showcased very intensely. The first half is extremely entertaining and the action sequences will be an eye feast. Things become somewhat slow in the second half as the narration also falls slow. However, the director has succeeded in keeping the audience stick to their chairs. Performances, background score and narration will be the plus points of this film whereas some draggy scenes in the second half will be the minus points. On the whole, ‘Bandobasth’ is a must-watch movie not only for Suriya fans but all sections of the audience.