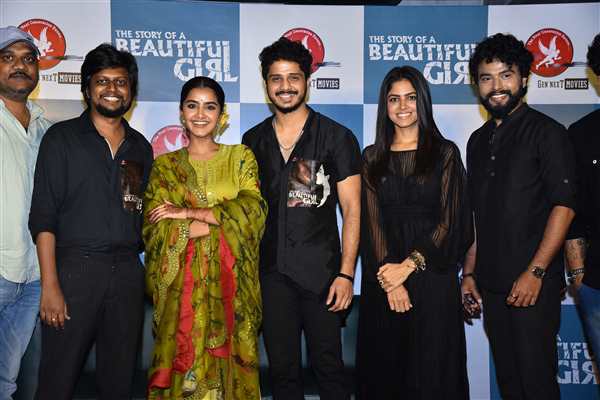 South diva Anupama Parameswaran unveiled the first look poster of the upcoming film ‘the story of… A BEAUTIFUL GIRL’ here in the city. Directed by Ravi Prakash Bodapati, the film features Nihal Kodhaty and Drishika Chander in the lead. Touted to be a light-hearted love story, ”The Story of a Beautiful Girl’ is being bankrolled by Gen’nexT Movies which had produced Charmee Kaur starrer ‘Mantra’ a decade ago. The Gen’nexT banner has another film ‘Butterfly’ starring Anupama. It is going to hit the OTT platform soon.

Speaking on the occasion, Anupama Parameswaran said, “I won’t say much about the film ”Butterfly’ because it is coming in ‘Disney Hotstar’ and audiences would anyway witness the story what it is at the comfort of their house very soon. The team at Gen’nexT Movies that I have worked with is very brilliant. I’m very close to this movie crew of ”The Story of a Beautiful Girl’ as its shoot was happening in parallel along with the shoot of Butterfly. The kind of determination that everybody has put into this film is so immense. None of us have had the separation in the work. Everyone worked in tandem to make the two projects see the light of day.”

Describing the two characters in the film Ravi and Charitra, protagonist Nihal says Charitra guides this directionless youngster Ravi into a new world. “And you can see the pigeons fly off in the backdrop — it symbolically represents the two love birds who want to take flight despite fighting all odds in their lives. That’s how much we went into the detailing, and that’s how hard we worked for the film. Trust me, this film ‘The Story of a Beautiful Girl’ is going to be one of its kind,” actor Nihal added thanking his parents and the co-actors who are part of his dream project. Sharing his perspective on taking a shot at acting career, Nihal said, “Someone asked me if you would not be an actor, who would you be? I said I’d be a struggling actor. I would do theatre, I thought I am a crack type and no one would be like me until I met Drishika, I changed my perspective,” he added.

Director Ravi Prakash Bodapati, who wrote the story and screenplay for the famed movie ‘Mantra’ and was also one of the producers of it, said he waited for a long time to make a comeback on the Telugu silver screen. “There is a long list to whom I should thank all these years. Becoming a star is not so easy. You could become a star if only everything comes your way. Audiences would really enjoy this film. We have so many films coming from Gen Next Movies, this is just a beginning,” he added.

Film producer Prasad Tiruvalluri, who worked in the IT industry earlier, said the film is currently in the post-production stage. “Pushyami Dowleswarapu, Anil, Kranthi Juvvala have jointly made this film. The film starring Charmee Kaur, Mantra(2007) earned cult status. Ravi Prakash Bodapati who penned the ‘Mantra’ story-screenplay and who also Produced it has now come up with another interesting tale ‘The Story of a Beautiful Girl’. Although everyone is relatively new to the industry, the effort that went into the film was astounding. I am confident that the story would impress audiences,” Prasad added.