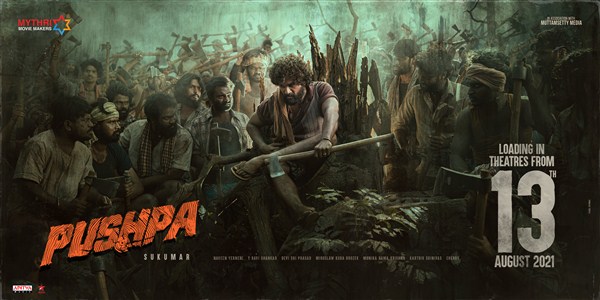 Stylish Star Allu Arjun and creative film-maker Sukumar are in rich vein of form as they have scored industry hits with Ala Vaikunthapurramuloo and Rangasthalam respectively. The duo previously collaborated for two blockbusters namely Arya and Arya 2. They are coming together again for pan-India project ‘Pushpa’ and Mythri Movie Makers, Muttamsetty media are jointly bankrolling it. The title and first look poster of the film had garnered a unanimously positive response from Allu Arjun’s fans and Tollywood followers alike. The shooting is presently going on at Maredumilli forest region, Andhra Pradesh and Allu Arjun, along with other lead cast is taking part in the same. In the ongoing schedule, Allu Arjun and the remaining unit members are braving freezing cold conditions and are shooting right from 4 AM in the morning.

Talented young actress Rashmika Mandanna is pairing up with Allu Arjun who plays Pushpa Raj in the film. Devi Sri Prasad, Allu Arjun, and Sukumar have produced musical blockbusters in the past and they are collaborating again for Pushpa. Moreover, acclaimed cinematographer Miroslav Kuba Brozek’s visuals are said to be another major highlight of Pushpa.

Today, the makers of Pushpa have announced that the rustic action thriller will be hitting the big screens across the globe on 13th of August. The film will be simultaneously releasing in 5 languages namely Telugu, Tamil, Malayalam, Kannada, and Hindi. Also, a stunning poster of the film, showcasing Allu Arjun in a rugged look was released on the occasion.