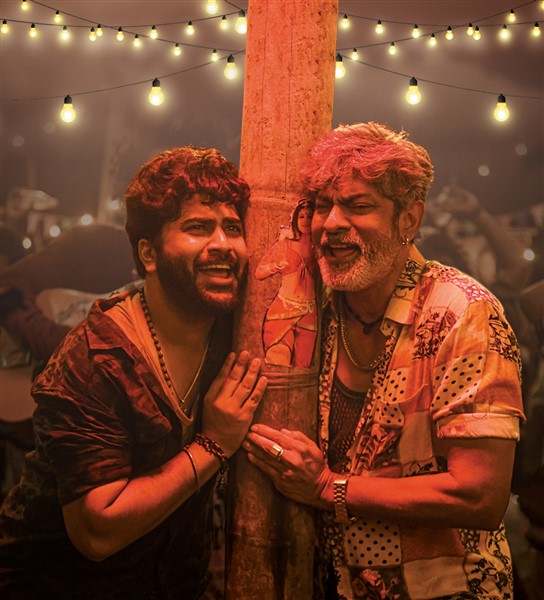 It’s a rare scenario that, every update of a film becomes a sensation and it’s happening for Maha Samudram which is one of the most awaited films of this year. Promising actors- Sharwanand, Siddharth, talented director Ajay Bhupathi and established production house AK Entertainments are working together as a team for this biggest action extravaganza.

Even a small promo to announce to kick-start musical promotions has also garnered remarkable response. Chaitan Bharadwaj has rendered the songs and the promo of first single Hey Rambha hinted it’s not a regular mass number and it’s a tribute to evergreen actress Rambha.

Even the composition is not a typical ‘special’ number. The song has a special charm with danceable beats. Rambha’s glamorous cut-outs, banners and photos are everywhere in the song and it’s like Rambha’s fans association celebrating her birthday as a grand bash.

Sharwanand and Jagapathi Babu can be seen expressing their devotion for Rambha. Both appeared in mass avatars and their dances are fun to watch.

Chaitan Bharadwaj himself has crooned the number remarkably, while lyrics are penned by Bhaskara Bhatla. Jani master has choreographed the song which is going to be the mass number of the year. Production design looks grand.

Aditi Rao Hydari and Anu Emmanuel are the female leads in the film.

Maha Samudram has wrapped up its entire shoot and the film is getting ready for theatrical release.