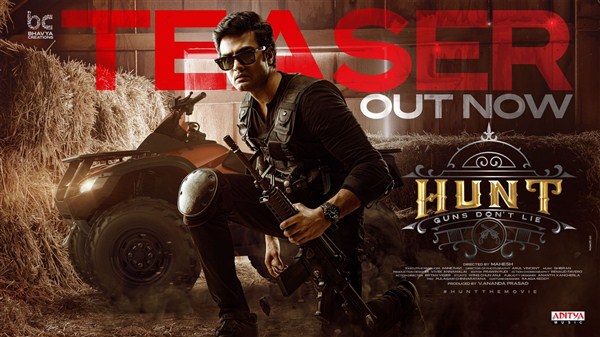 Talented actor and newly termed Nitro Star, Sudheer Babu has the knack of picking fresh and exciting scripts. His upcoming film, Hunt, which is directed by Mahesh and produced by the veteran V Anand Prasad under Bhavya Creations banner, falls under the same category.

The teaser of Hunt was released a little while back by the makers and it confirms that the film is a complete action thriller loaded with sleek action shots and pulsating background score. The teaser starts with a doctor saying to Sudheer “He was Arjun A and you are Arjun B, sharing the same body. You don’t know your own past, but you’re just as lethal.”

It is clear that Sudheer is playing a character with dual shades in the film. He looks sharp in the role of a cop. He has undergone a transformation as well and he flaunts his toned physique. The bipolar cop thriller drama and the whodunnit mystery are highlighted in the teaser. They raise the curiosity.

The cinematography and BGM look sharp. The teaser cut is slick. The action part is extensively highlighted. Veteran actor Srikanth and Premisthe fame Bharath are seen in important roles in the film. This should add more novelty to the cast. The film is directed by Mahesh and produced by V Anand Prasad under Bhavya Creations banner. The theatrical release date will be announced soon.

The First Visual Of King Nagarjuna, Praveen Sattaru, The Ghost On...